Just the Way You Are by Pepper Basham

By: momentsdippedinink
In: Contemporary Romance
With: 10 Comments

Book: Just the Way You Are

Single mom, Eisley Barrett, prefers to keep romance safely housed within a centuries-old mystery, but when she travels to England to unearth the secret, an actor with a sordid past offers her reluctant heart a very different type of discovery.
Wes Harrison has a past he’s ashamed to confess. Suspicious and cynical, he’s managed to avoid romantic entanglements since a tragedy upended his career and life, that is until American Eisley Barrett comes along. Her authenticity and kindness upend his bitter assumptions and send his heart into unscripted territory.
When his past threatens to ruin a second chance at love, can some Appalachian matchmaking and letters from the grace salvage their unexpected romance? 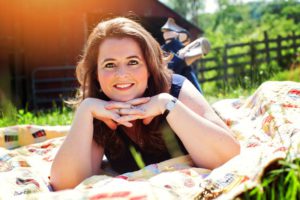 Pepper Basham is an award-winning author who writes novels inspired by her love for history and the Blue Ridge Mountains. Her Penned in Time series has garnered recognition in the Inspys, Grace Awards, and the ACFW Carol Awards. Her contemporary romance novel, A Twist of Faith, received 4-stars from Romantic Times, and most recently, her newest release, The Thorn Healer, received a Top Pick from RT with 4 ½ stars. Her newest contemporary romance, Just the Way You Are, releases in April 2016. You can get to know Pepper on Facebook, or over at her group blog, The Writer’s Alley, or Instagram.

“Yep, he was Ghirardelli in human form.” This quote from her book described the male lead in a heart-melting form. Pepper Basham’s writing style—just as much so. Ghirardelli’s in ink form.

Warning: do not read while holding a sleeping toddler. I made that mistake. I couldn’t stop laughing at Eisley’s inner monologue and lack of filter. Her unpredictable manner left me wondering what on Earth she’d say, do, or think next. I felt as though I did not read a mere book, but connected through real relationships with Eisley and Wes. Almost as if they were new friends.

A good mix of chemistry, faith, and heart-melting romance made for one of the best reader experiences I’ve ever enjoyed. This was the first book I read by Pepper Basham, but won’t be my last. She jumped to the top of my favorite authors list with “I squished a grandpa.”

The kissing scenes were a little heated, but I thought that added to the real struggle within dating relationships. I liked how Eisley and Wes learned to trust God with their fleshly desire, rather than rely solely in each other. While this was a romance, it was so much more. Two people in a whirlwind romance with trust issues who just wanted to seek God. My only complaint: I wanted more. I wasn’t ready for the story to end.

My favorite quote: “Maybe faith, trust, and a little pixie dust wasn’t such a bad idea, even for grown-ups—especially grown-ups who knew about the wonder of God’s love.”

I was given a complimentary copy of this book in exchange for an honest review. All opinions are my own. I give this five stars.

Caffeine—because once you start reading, you won’t want to stop

Thank you so much for featuring my newest novel, Just the Way You Are, on CelebrateLit. I am THRILLED to be a part of this and to share a story that is very dear to my heart.

Just the Way You Are is my first ‘true’ Britallachian romantic comedy. Even though I’ve written comedy in some of my other novels and included elements of both Appalachia and Britain, this one embodies the tag #britallachian to the core. For those of you who’ve read some of my previous books, you know I’m a big fan of my native Blue Ridge Mountains and the Appalachian culture. You may also know that I’m a proud Anglophile.

Those two loves met in Just the Way You Are – and I tossed lots of other things I love best into the mix. What are those ingredients, you might ask?

Well, let me just tell ya! Just the Way You Are is a blend of Blue Ridge Mountains, Appalachian culture, big (hilarious) family dynamics, matchmaking, Britain, a swoony English hero, a quirky, magnanimous heroine, a bunch of adorable kids, Scooby Doo and Indiana Jones references, lots of humor, a historical mystery, a devious villainess, stately manor houses, secret rooms, love letters, and matchmaking all rolled into one…oh, and did I mention brain-numbing romance?

(Did anyone else feel the need to add “fencing, fighting, torture, revenge, giants, monsters, chases, escapes, miracles, true love….” From the Princess Bride?) J I don’t think I included torture, giants, or monsters in Just the Way You Are…but I may have the other elements in this novel J

Okay, maybe I’m exaggerating about the brain-numbing, but I do have a tendency to err on the side of overly dramatic J

Within the pages of Just the Way You Are, you’ll meet people from my own family, people from my imagination, and some people who stepped into the story without one ounce of my planning to ever meet them. This story came out of my desire to write something I love reading – spicy romance, clean humor, culture clashes, the big love of family, and redemption.

How did my heroine Eisley Barrett evolve? Out of thin air. I was washing dishes one afternoon and staring out the window into our small backyard with the Blue Ridge Mountains painting a purplish-blue frame on the horizon when I closed my eyes. Into my imagination came this ginger-headed woman walking through Heathrow International Airport pulling a hot pink bag behind her…and then, she tripped and fell. That was it. That’s how I was introduced to my insecure, hilarious, romance-loving, single-mom heroine.

And the dashing hero? Okay, this may sound ridiculous, but I was watching an interview about Richard Armitage (Thoron Oakenshield, Guy of Gisborne, etc) regarding his lovely costume drama North and South where he plays a very dashing British hero. Anyway, he was SUCH a gentleman to watch during the interview. So polite. Kind. Funny, in a sweet way, and then, out of the blue, he said the word ‘gosh’. I know, that may not be a big deal to anyone but me, but after watching celebrity interviews where every other word needed a censor, the very fact that this elegant man used the word ‘gosh’, sent my writing brain into motion. My first internal question? What if a movie star with a tender heart had been burned by the pretension and expectation of celebrity status? What kind of woman could touch a heart who’d lost his faith in love’s authenticity?

Enter my red-head single-mom toting her pink bag through Heathrow and you have the very beginning of Just the Way You Are – a story of forgiveness, second chances…and a little bit of movie magic.