How to Potty Train a Stubborn Child: Part One

By: momentsdippedinink
In: Babies & Toddlers
With: 12 Comments

Apparently, my stubborn three-year-old didn’t get the memo.

All the research in the world doesn’t mean that my cloth diapered baby girl would be potty trained early because when it comes down to it, she is her own person.

My husband works in clinical research. You can conduct studies on diapers, creams, and medications, but in the long run, each person can have a different reaction. That doesn’t mean you throw out the study, but just that you have to re-adjust your thinking. This is what is called an outlier. Someone or something that stands out of the norm.

So, here I am. An overtired mom praying for the day that I only have one child in diapers…and I am re-adjusting my thinking.

Here are five tips for potty training a stubborn child (because I can’t be the only one!)

Stop thinking your child is just being stubborn. Ha, as I’ve referred to potty training a stubborn child, I realized that I’m looking at it wrong. As parents, we have this timeline that we expect our children to just get behind and follow. They walk at one, talk at two. They stop breastfeeding at twelve months or twenty-four months or thirty-six months…or they never breastfeed. We have this idea in our heads that they’ll follow our timeline…but that’s not always the case. If you had told me when Brookie was a baby that she would still be in diapers, I would’ve laughed.

Here’s the bottom line. Potty training is a skill to be learned. Just like walking, counting to ten, reading, and riding a bike, it is a skill. A skill that each child reaches when they’re ready. If they’re not ready, you’re going to be banging your head against a wall while your child is in tears. It will be a long, drawn out process that will fail. I say this–because I’ve been there. We threw in the towel on potty training and I don’t regret it.

Talk it up. We borrowed a DVD from the library called Potty Power. It was great. Brookie couldn’t stop talking about the potty. For the first time in her life, it seemed to click. Not enough to get her on the potty full-time, but enough that the potty wasn’t this big and scary thing. Let your child see you go and talk about what you’re doing. It can be awkward, but it really helps if you can get the conversation going. Have terms so that they know what to say when they have to go. Make it to be a normal, healthy part of life. Remember, they will eventually forget any awkward bathroom conversation from two or three years old. 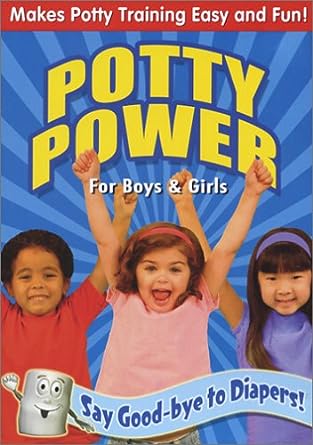 Do not discipline. A child who has never been potty trained should not be disciplined for it. Like I said, earlier, it is a skill. Treat it as such. If you feel like you’re not making progress and your child is too old to still be in diapers, talk to your doctor to rule out medical conditions. Most children will reach a point where they are embarrassed to be in diapers before it can be a discipline issue.

Use rewards. Find something that works for you and for your child. My daughter loves stickers and chocolate. We utilize both. Stickers if she asks to sit on the potty and does so. M & M’s if she goes. Then, celebrate the success. Make the experience a positive one. Treat yourself too, parent. One M & M for the child, five M & M’s for the parent. This process can be hard on the parent too.

And finally, don’t push too hard. If your child is resisting every effort, then take a break. Remember, your child won’t go to college in diapers. It will happen, eventually. Honestly, it’ll happen sooner if you aren’t pushing too hard. One day, it will just click.

I’ve heard the stories of children who wake up one morning and just start going, all on their own. Hey, if you can potty train that way, why put pressure on them earlier? That’s where we’re at. I am hoping one day she’ll do just that.

Until then, this is what I’m doing to encourage us in that direction.

A reward system in place. Like I said, stickers for sitting on the potty and m&m’s for going. Lots and lots of praise.

Cloth trainers. I ordered them from Fluffy Penguin where I order most of our diapers. They’re cheaper than pull-ups and she actually feels the wetness. For the first time, she asks for diaper changes and she’s even gone on the potty instead a few times.

Talk it up. We talk about the fact that mommy and daddy use the potty. We watch potty training videos on YouTube or from the library. When she points out the “diaper” on her Princess Belle doll, I gently correct her and say something like, “she’s a big girl princess wearing big girl underwear.”

Sit her on the potty. I try to get her to sit on the potty twice a day. She rarely goes, but she’s getting there. I’m also trying to get her more comfortable with public bathrooms because right now she’s terrified of those.

Pray for patience. I’ll admit it. I am so over waiting, but I’m  waiting her out, anyway. She’ll get there. In fact, I’ve seen signs that we’re almost there. I can’t wait to share what worked and what didn’t.
In the comments, share what your biggest pitfalls were when it came to potty training. Let us encourage one another. We’re not in it alone!